For many years I have wanted a bike that had the weight and speedy feeling of a cross country bike, but the handling of a true long travel trail bike, but this cliche really never was borne out by all the bikes in the past that promised this. In the end i tended to ride heavy or (expensive lighter) long travel trail bikes that had the slack angles i wanted to give the confident handling on the techy trails. These long travel bikes always felt mushy though on the ups when riding the bike aggressively.For the type of trails on the north downs where i mainly ride, these were overkill. 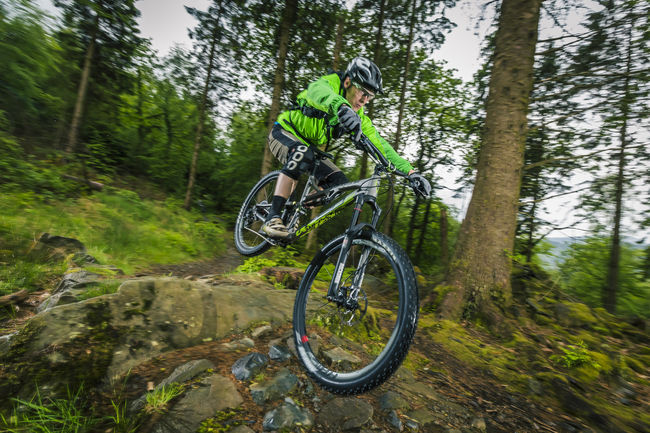 This however is all changing as manufacture's start to build bikes like the T130, which has the slack angles and lowish bottom brackets of a trail bike but in a shorter travel (suspension) package. As Ian Alexander (the whyte designer ) says, the geometry is the most important and overlooked part of the bike performance.

Other things like the superb rockshox Pike fork, which resist diving whilst going down steep descents, the bigger 650b wheels, the reverb dropper post and the fantastic 1 x 11 drivetrain on the SCR bike have made this bike feel more planted and more confidence inspiring that it should.If your riding a short travel bike from a few years ago this bike will be a revelation.

By using the Sram 1x 11 drive train on the SCR bike, this has allowed the designers at whyte to stiffen the rear end of the bike considerably by not being constrained by the drivetrain. Only one chainring has allowed symmetrical rear chain stays and a much wider and stiffer suspension pivot at the bottom bracket. This feature is shared on both the G150 bikes and the T129scr bikes in the whyte range.

There not much really to criticise on this bike, for the money its a great package, the new sram guide brakes seem powerful and better than the sram/avid brakes that went before.The drivetrain is fantastic with a super light shift and a great range of gears, easily moved to a higher or lower range of gears by swapping out the one front chainring if needed.The only thing to watch out for is that super expensive machined rear cassette which at £250 replacement cost needs to be looked after with frequent replacement chains to eek out its life.

As a postscipt, whyte also make the T129 SCR bike which has similar geometry and features but with 29" wheels. Over the rough stuff the T129 is arguably a faster bike, but i think the 650b T130 bike will appeal to more people.